When is a Hoof Conditioner Really Necessary?

Should hoof conditioners only be used for treating a hoof problem, for hoof protection, for cosmetic purposes (wow factor), or not at all?

For generations horse owners have seen the benefits of coating hooves with various substances for their protection and flexibility. Additionally, some old-time farriers have reported success in improving the hoof condition by abrading the coronet band in order to increase blood flow to the hoof. We do not recommend this procedure today because of the chances of infection. However, the basic scientific principles they were trying to achieve such as increasing blood flow, maintaining the internal moisture of the hoof wall and repelling harmful substances are as valid today as they were then.

Does your horse have soft, mushy hooves, dry brittle cracked hooves, seedy toe, slow growing hooves, structural damage, diseased hooves or other problems? Is the current environment wet or dry, cold or hot? Knowing some basic biology and functions of the hoof will be helpful in influencing your decision.

The Composition of the Hoof Wall

The hoof wall is the weight bearing structure of the hoof and composed of thousands of tiny hollow fibers called tubules. These tubules run vertically from the coronary band and are cemented together with a protein substance called keratin. Layer upon layer of these tubules act like springs to absorb tremendous amounts of concussive force while retaining the necessary tensile strength. 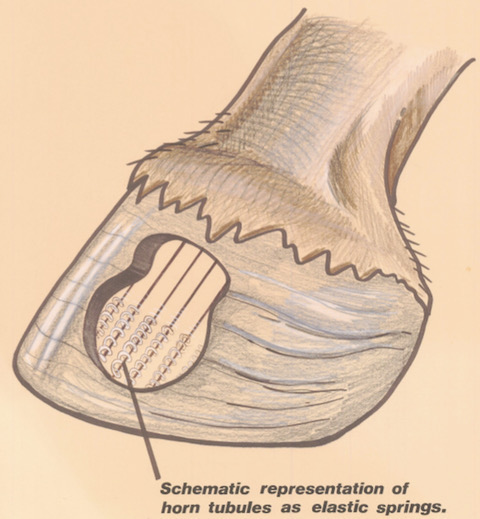 The elasticity of these tubules and the hoof wall in general is dependent on its internal moisture content. This moisture is not simply water, but a mix of salts and electrolytes much like that found in an I.V. solution. Without this essential moisture, the hoof wall would dry up, crack, become brittle and generally fail at its job of a leaf spring/shock absorber. Too much moisture, on the other hand, can make a hoof too soft, mushy and fail to absorb its concussive load. We now understand that a hoof conditioner should help maintain the natural moisture balance found within the hoof wall.

Where Does the Hoof Get its Moisture From? 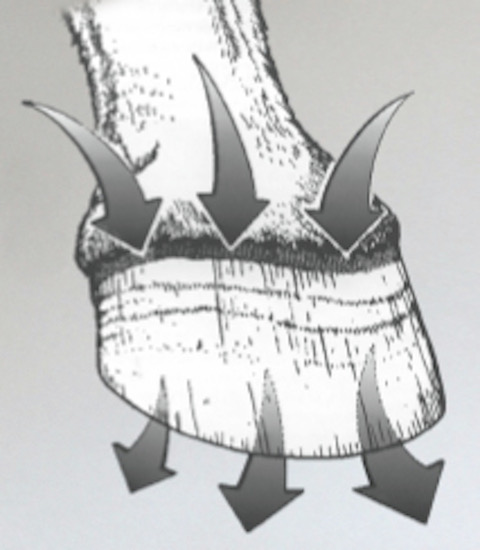 Where does this important moisture come from? The hoof is designed to receive at least 90% of its moisture from within, the blood and lymph vessels, and a small percentage from the sole. The modern hoof conditioners that are most effective are the ones that stop the evaporation of this essential moisture from escaping the hoof capsule (horn, sole, and frog). Attempting to moisturize the hoof from external sources such as oils, grease or salves is mostly futile because they wash off too rapidly. The coronary band is the only place where products meant to increase hoof growth should be applied, and even care should be taken here. This is where, along with the sole, transpiration or “breathing” occurs.

Do Wild Horses Have Hoof Problems?

You may ask, “Why don’t wild horses have hoof problems? Why do I need hoof protection if I don’t have any hoof problems now?” The simple answers is in domestication of the horse. The periople is a natural protein protective covering that is produced on the hoof wall that protects against harmful contaminants. Thus the hoof actually has its own natural, delicate hoof sealant.

This natural sealant serves wild horses well, but it is usually lost in a domestic environment. It is inadvertently removed during the shoeing process when the hoof is trimmed, balanced, leveled and shod. To compound the problem further, the domestic horse can no longer roam free over miles of open space but is confined to smaller pastures, paddocks and stalls.

Now, with little or no natural sealant left and with the horn tubules opened from nail holes and rasping, hooves are exposed to higher concentrations of destructive uric acid and other contaminants. With the protective outer covering removed, the introduction of these agents into the hoof wall can lead to breakdown of its protein, keratin. It is important to remember that because the hoof is protein, it is potentially biodegradable. Domesticated horses need a hoof conditioner that effectively replaces the periople.

Tiny openings on the hoof wall, from cracks and nail holes, are the main pathways for infection from bacteria, fungus or other contaminants. Your grandfather and his grandfather before him intuitively used a type of hoof conditioner called pine tar. This product acted as a precursor to modern hoof conditioners as it helped to retain moisture in the hoof wall. Pine tar, unfortunately, had its drawbacks, but Grandpa was on the right track. Later came various products that contained oils, and petroleum-based ingredients that were used with limited success to coat the hoof and fill in the nail holes. Hoof conditioners that contain pine tar, salves and oils usually stay fluid (wet) after they are applied and breakdown quickly when exposed to the environment. 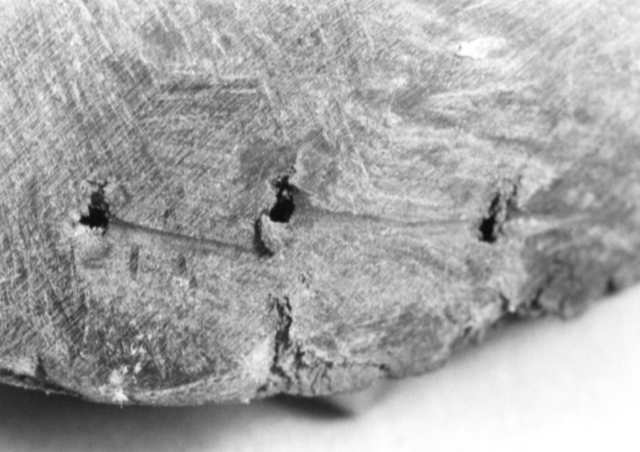 These dressings are usually sticky, and as such attract contaminants instead of repelling them. Their applications actually may be counter-productive because they can serve as a bacterial and/or fungal growth medium when they fester in a small crack or nail hole. These organisms produce enzymes and exotoxins that can break down collagen and protein in the hoof wall. If you do not get disease of the hoof wall, the least that can happen is that the hoof can get soft and punky at the nail holes. If this happens, your horse will throw more than his fair share of shoes.

Some of the modern day hoof conditioners were a spin-off from the field of dentistry. For years, dentists have been coating children’s teeth with synthetic sealants to keep them protected against tooth decay. Someone had the idea to try this same technique and apply it to horses’ hooves. Others tried fingernail polish to provide a cosmetic shine. These synthetic coatings, such as methyl cellulose (fingernail polish) and urethane polymers, can outperform hoof oils, salves and pine tar, but they have their limitations on hooves. Being impervious to moisture, these synthetic sealants do not allow the beneficial transpiration (water vapor transmission) to occur through the sole and frog where the hoof needs to breathe. As a result, synthetic sealants can only be used on the hoof wall, not on the sole and frog where serious protection is also needed.

The latest scientific methods have given us dual-action hoof conditioners that coat and protect the entire hoof capsule (horn, sole and frog). They are not synthetic substances that are made from petroleum chemicals. The finished coats of the newer dual-action products are made from natural proteins that help maintain the hoof’s natural moisture balance, unlike oils, salves and pine tar that remain fluid (a sticky liquid), the new modern coatings dry/cure to a battle-hardened finish. They last longer. They also contain scientific ingredients that provide the healthy hoof tissue with an antiseptic barrier against infection. Grandpa would have been proud to use these products had the technology existed in his day. Thanks Grandpa, for getting us this far! For more information and articles, visit SBS Equine.