White line disease, seedy toe, hoof thrush, and many other hoof problems are the direct result of the domestication of the horse. The horse has been a roaming animal for 40 million years. In its natural habitat horses would not be in constant contact with manure and urine. Horses’ feet have no natural protection against the effects of ammonia for example. When you consider that the average horse produces 40 pounds of manure a day and gallons of urine, it is no wonder they have hoof problems.

What is White Line Disease ?

Researchers have spent a great deal of time trying to find the single organism that causes the destruction of hoof wall at the stratum medium, referred to as white line disease. The hope is that the discovery of the elusive bacteria or fungus will result in a definitive cure. Unfortunately, this approach is too simplistic for the complex biological event that is actually taking place. White line disease is caused by two different types of opportunistic microorganisms that exist in a symbiotic relationship. Together they produce enzymes and exotoxins that break down the protein and collagen of the hoof wall. This dynamic colony of microorganisms consists of at least one type of destructive bacteria and at least one fungus. 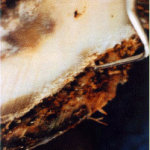 Let’s examine a typical case of white line disease found in the Northeast (Figure 1). The colony of organisms found here are unique to this particular horse and may be entirely different from the ones you are fighting, but remember what all cases have in common: there will be at least one destructive bacteria along with at least one destructive fungus found in the culture.

We used sterile culture containers provided free of charge by a commercial medical laboratory to gather our hoof samples. We scooped out some soft, diseased hoof material with a clean instrument and gave the culture container to the laboratory (Figure 2). In our case we wanted to retest the effectiveness of an over-the-counter product specifically designed to treat white line disease, as well as identify all the bacteria and fungus present. The over-the-counter product we supplied to the laboratory technician was Sav-A-Hoof Gel by SBS Equine Products. The laboratory technicians took the samples of diseased hoof wall and spread it on a blood agar plate and then placed it in an incubator. A mixed culture of organisms, just like what was found in the hoof, resulted (Figure 3). Each separate colony was then placed on their own agar plates, some in the presence of oxygen and some without, and the fungal samples were placed in small jars. This resulted in pure cultures for six different bacteria and a fungus, which were then identified by the technician.

So what did we find from this mixed bag culture of micro-organisms? We ran the gamut, as one would expect, from very harmful to relatively benign bacteria, as well as a stubborn fungus in our sample. In every case, the over-the-counter product we tested – Sav-A-Hoof Gel – worked extremely well at killing both bacteria and fungus (Figures 4 & 5). The special culture pictured in the jar isolated the fungus Geotrichum. This fungus is an aggressive saprophyte that grows vigorously on organic matter. It is commonly found in sewage treatment plants and is a spore former, which means it is difficult to eliminate. As shown in Figure 5, the Sav-A-Hoof Gel effectively killed this fungus, as well.

Note the fungus is unable to grow or survive within the clear area surrounding the Sav-A-Hoof Gel sample. Even with ideal growth conditions, with no oxygen and a rich growth medium, this area is fungus free and again represents the effective kill zone.

What are the best ways to treat and prevent White Line Disease ?

The best ways to treat white line disease is first to recognize it early and then treat it with a product that is a broad-spectrum bactericide as well as a fungicide. Deeply rooted infections like white line disease are impossible to kill with one application of a strong topical agent. Repeated use of these strong chemicals can be harmful to the surrounding healthy hoof tissue and slow the healing process. The SBS Researchers developed formulas that stop bacteria and fungi without harming sensitive surrounding tissue. The formulas are not caustic and can be used as often as necessary to keep infection under control and give healthy hoof tissue a chance to prosper.

Remember that dry, cool conditions are your ally and that warm, wet ones are your enemy. Because some of the different organisms present are capable of producing spores, choose products that are powerful and stay active for a long time. It takes time and patience to treat these infections once they gain a foothold. Even if you don’t kill all the organisms initially, repeated and consistent use with the right products may kill enough of them to slow the advancement of the disease to the point that it may grow out with successive trimmings.

The best ways to prevent hoof disease is to: (1) Seal out pathways of infection, which are cracks, nail holes and fissures. Use a quality hoof sealant that is made to web-seal these openings. (2) Frequent cleaning and trimming are the most important steps in dealing with infection. Encourage horse handlers or owners to be consistent with their hoof grooming. Remember, you cannot kill white line disease with any one treatment. Removing diseased tissue by the farrier and opening up the hoof to oxygen will give a head start to recovery. Improperly trimmed hoofs prevent oxygen from getting in crevices. (3) Use hoof conditioners that cure/or dry hard and build up protection. Hoof oils generally remain fluid (wet) and do not seal openings. They also offer less protection against hoof disease, and (4). Avoid using caustic chemicals that can harm healthy hoof tissue and slow the healing process.