How Can I Make My Horses Hooves Grow Faster There are three major factors that influence hoof growth. They can include any combination of dietary, mechanical, or topically applied factors.

First, numerous studies have shown that dietary nutritional supplements containing biotin can improve the quality and growth of hooves in horses with cell damaged feet if given continuously for an 8 to 12 month period.

Second, mechanical factors such as trimming, shoeing, and balancing the feet by experienced professional farriers can show some improvement after one or two shoeing cycles or 2 to 4 months.

Third, copper peptides applied topically to the coronet band of the hooves by their handlers has shown dramatic improvement in hoof growth and quality in only 1 to 2 months. It works faster because of its direct contact with the receptor cells of the coronary band, where the new hoof growth begins.

What are copper peptides and how do they work ?

Peptides are usually found inside cells and act as cell function facilitators. Copper peptides are specific peptides with a copper ion attached to them and are found naturally in cells. They act as messengers at the cellular level and signal the brain to “switch on” cells in significant ways to promote collagen production and deliver them where needed to repair damaged tissue. Collagen is the body’s healing mechanism.

The discovery of copper peptides’ role in protecting and healing damaged cells is credited to Dr. Loren Pickart of Switzerland, dating back to the 1970s. Dr. Pickart was interested in the possibility that copper peptides may stimulate positive hair and skin growth in humans.

What role did horses play in copper peptide development?

Dr. Pickard’s team determined that the damp conditions of Washington State presented the ideal location for conducting their research. They used horses as the test subjects, even though product development for humans was the intended market. Not only did long-standing skin irritations on the horses’ legs heal, but they noted (in a footnote) that damaged hooves improved markedly as well.

Although copper peptides were found to be very effective and beneficial, no equine products were produced using this technology until 2007, over 30 years later. This is when SBS EQUINE researcher, Dr. Richard Shakalis, introduced TOE GROW. Dr. Shakalis happened upon the public records released on the success of copper peptides tested on horses many years earlier. 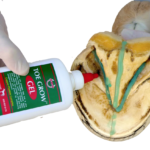 In 2019, after 12 years of field use on horses, Ron Perszewski, associate editor of the American Farriers Journal published the article, “Technology Developed for Humans Now Used to Repair Hooves.” He said, “copper peptides combined with good nutrition can go a long way toward restoring damaged hooves, thanks to the researchers with SBS EQUINE, who brought us TOE GROW Spray & Gel.

When applied topically to the coronary band, sole, and frog, TOE GROW “switches-on” the receptor cells to draw the nutrition needed to refuel collagen from the blood supply to repair cell damage. TOE GROW also improves the frogs’ function both a shock absorber and blood pump (circulates blood back up into the legs). For more information on hoof care, please visit www.sbsequine.com.